In putting the final touches to my upcoming book, my editor asked me to locate the source for a famous goals research study I mentioned. It led to a surprising truth about what I understood about achieving success through written goals.

I’m glad I caught this before going to print! For a moment, it also made me question everything I’d ever accepted as true about written goals as a part of my success.

In this article, I’ll walk you through the surprising truth about the 1953 Harvard study on goals, and what we really know about achieving success through written goals.

In 1953, Harvard conducted a study on goal-setting which has since been quoted and referenced in countless articles and books. The study found that people who wrote down their goals were more likely to achieve them than those who didn’t. This became known as the ‘Harvard Study on Goals’.

Here is the gist of the study’s results. A 1953 graduating class of Harvard MBA students was asked about whether, or not, they had goals. The following were the responses:

Ten years later, it was discovered that the 13% who had non-written goals earned on average twice as much as the 84% who did not have goals at all. The 3% who had written goals outperformed everyone altogether by earning ten times as much as all of the other 97% combined.

That’s exactly what happened. I had been living off written goals ever since learning about this study decades ago. There are blog posts and emails floating around the Internet with my name on them referencing this very study.

The problem is that the 1953 Harvard study never happened according to an article I found from Mike Morrison.

It Was Yale Not Harvard, Jerry

Obviously, I would not find the famous goals research study done by Harvard in 1953, because that study was conducted by Yale University.

It turned out that was not true either, and Fast Company discovered this back in 1996 while I was first latching onto the idea of having written goals as an undergraduate student!

There are other variations of this study based on the year it happened, 1979, 1984. None of that matters because there was never goals research conducted on MBA graduates to show the income earning differences based on whether or not you have written goals.

But, Wait! There is Real Proof, Too! The Gail Matthews Goals Study

There is a Gail Matthews goals study that was published in 2007 through Dominican University. Yes!

Professor Matthews’s research was conducted with an international body of participants whose careers represented a wide variety of industries.

In short, participants were divided into five groups ranging from having no written goals to having three layers of support in addition to written goals.

Those who had written goals reported experiencing success as a result of having written goals compared to the control group that could state intentions but not write down any goals.

Success for those participating in this goals research included some of the following:

Of the five groups in the goals research study, one reported having the most success. This group had four key ingredients, and I’ll discuss this next.

The goals research conducted by Gail Matthews showed that having the following four ingredients would lead to the best chances and levels of success compared to those who do not have goals: written and clear goals, commitment to action, accountability partner, and weekly progress reports.

Writing your goals out whether digitally or on paper with a pen creates something tangible turning an idea into reality.

You are able to reference your written goals with consistency and hold yourself accountable. Like reading a map, you are able to see your destination and measure progress. Download a FREE copy of Measure It to Make It if you’d like help creating clear goals for your career, family, or life in general.

It’s nice to say you want to write a book or start a podcast. Without action, it does not matter though.

Stating “I will achieve my goal by [fill in the blank],” breathes life into your desire to have an improvement in your life. Your outcome-based goal now has an activity-based goal you can track on a daily and weekly basis.

The action, of course, needs to have a direct impact to achieve your goals. It does not make sense to say you want to learn how to bake a cake and have the commitment to take swimming lessons instead.

If you want to be promoted at work or get a pay raise, your commitment to action should be something that increases your value to the organization such as taking on a project that will stretch you or gaining a new skill. It may need to replace a current action like showing up to the office, then spending the first hour going to the cafeteria to get breakfast.

Matthews’ goals research used the phrase “shared with a friend”. The concept can be applied to sharing it with anyone you know and trust who will hold you accountable to your written goals and commitments to action.

Let’s call that person with whom you share your goals and commitments to action an accountability partner. That person can be a friend, a coach, your supervisor, etc. This person should have permission to ask you how things are going without you getting defensive about it. They’re just asking you how it is coming along, and maybe seeing where you are limiting yourself or need to get unstuck.

Your accountability partner needs to also be someone who is committed to hearing from you as you provide weekly progress reports.

This activity is for your benefit. Pulling together information on your progress lets you see how you are doing, and where you saw the biggest wins and the biggest challenges. You can think through any adjustments that need to be made to remove obstacles and increase performance.

An added bonus to sharing your progress with your accountability partner is that it may inspire them to also create and pursue goals. Before you know it, you’re both encouraging each other to higher levels of success.

There you have it. The surprising truth about the famous Harvard/Yale goals research study was that it never happened, but there has been research conducted to show that written goals with added layers can help you level up your career and your life.

Let me know in the comments what you think, what you learned, and what you’d like to add about written goals.

Until next time, go live life beyond the rut!

I Almost Died in a Rut! The Kristi Miller Story – BtR 081 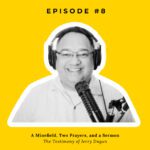