Life is Unfair and Filled with Opportunity

In 2007, Jerry was the top real estate sales agent in his company. The market tanked the following year and he struggled every year until he found his true passion in education/performance consulting.

Matt Miller found himself in a similar situation in 2003. He was top salesman for his company. A manager desired to capitalize on Matt’s success and increase Matt’s sales quota by almost double! His coworkers averaged an quota increase between five and ten percent. Unfair!

Life is unfair. That’s a fact in life. Life is also filled with opportunity. That is also a fact.

Moping was not an option for Matt. He immediately did whatever he needed to take care of his family, pizza delivery, cashing in aluminum cans, and creating assets that would provide multiple streams of income for his family.

“Life is a marathon. It is not a sprint.” 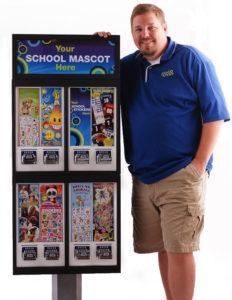 Matt Miller graduated from the United States Air Force Academy in 1989 and was an Air Force pilot for nine years. Post-military, Matt worked in both the medical and advertising fields as a top performer.

His long-term desire was to start a business to build a lifestyle based on freedom and choice.  A conversation with a good friend led him on a 10-year business quest that has brought Matt‘s franchising company to the cutting edge of both the vending and school fundraising industries. Starting with an investment of $100 he has built School Spirit Vending into a multi-million dollar vending business.

FREE Download – Live Your Dreams: 10 Reasons Why You Need a Vending Business

Rich Dad Poor Dad: What the Rich Teach Their Kids About Money that the Poor and Middle Class Do Not by Robert Kiyosaki

Outliers: The Story of Success by Malcolm Gladwell

“If you want to be great in something, you have to be willing to pay the price and put in the time.”