Brandon and Jerry discuss three standout marriage facts from Shaunti Feldhahn’s book, The Good News About Marriage, to offer you hope in your own marriage outlook.

Many people believe that half of all marriages end in divorce, that the divorce rate in churches is no different than outside of churches, and that the idea of marriage is antiquated.

What if there was a discovery, in the United States at least, of marriage facts that would profoundly turn those assumptions on their head?

Feldhahn uncovered some of the following through years of data analysis: 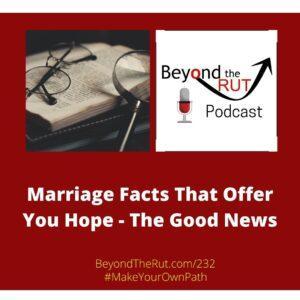 Since publishing this episode, we have received feedback on how these marriage facts discussed brought them hope. It showed that marriage is not as doomed as they believed all this time. It showed them that the phrase “the couple that prays together stays together” has some truth to it after all. The little things piece of the marriage facts discussion was probably the largest surprise of all. You’re not a drifted apart as you may think you are. One of you may simply be oblivious to what is bothering your spouse.

These Facts Are Not the Cure

One key thing you need to keep in mind as you listen to this episode is that knowing the facts is not the same as strengthening your marriage. Knowledge without action is just some cool stuff to know. If you want that knowledge to become useful, you need to reflect on it and apply it to specific areas of your life. We recommend listening to the next episode in this series where we discuss date ideas that help you stay connected with your spouse, BtR 233 – Dating Your Spouse to Stay Connected.

Have you ever had a discussion with your children about what a healthy relationship and healthy marriage look like? Consider what impact you could have if you shared these marriage facts with your teens. Do you think it would help reframe their perceptions about the future possibility of marriage? Hollywood casts these images of Cinderella-type of relationships where the princess meets her knight who initially appears in a rugged shell that she has to work on. Eventually, through her hard work, a knight in shining armor is revealed. How is that working for us? What if things would be easier if we looked for signs of a healthy marriage from the beginning of a dating relationship? One resource I’ve shared with my children since they were teenagers is a website called LoveIsRespect.org. It’s a relationship website designed specifically for teens and young adults. That site includes brochures, quizzes, and a chat hotline. Even if your teen is not dating right now, or you’re at least trying to convince yourself that your teen isn’t dating right now, Love is Respect is worth sharing because they may have a friend who needs the information.

For Him Only by Shaunti Feldhahn

For Her Only by Shaunti Feldhahn

Love and Respect by Eric Eggerichs

The Missing Ingredient by Mike Bullock

Listen to These Past Episodes

BtR 225 – On the Brighter Side of Marriage, Monica Tanner