It took me by surprise, but a social media post from a professional marketing coach gave me a few ideas to share with you on getting out of a rut.

The Story of My Marketing Coach

In a desire to improve the messaging of Beyond the Rut, I signed up for a couple of coaching programs offered by a marketing coach I highly respected in the podcasting and writing spaces.

We met at a podcasting conference, became friends on social media, and engaged in online conversation from time to time. The paid programs were helpful, and then they weren’t. A dilemma presented itself, and I found myself in shock and having to decide whether my brand could be connected to his brand.

It was a Facebook post, of course. Where else do we find drama these days? I guess there’s Twitter and Reddit. He was celebrating a milestone that meant a lot to him, and in the process, made a demeaning comment towards those he deemed “the other”. Heck, I was “the other”, a paying client who respected him for years!

Regardless of the topic, I pushed back. Others pushed back. We asked him to consider his own messaging. On one hand, he was celebrating, and that’s great. On the other hand, he was gloating at the expense of others. It went against what I expect of a Christian and of a professional coach whose job is to encourage others.

“You can’t encourage someone if you’re judging them.” – Lisa Reynolds, ICF-Certified Executive Coach

Rather than engage in dialogue from a point of humility and vulnerability, he un-Friended me on Facebook. He didn’t kick me out of the marketing coaching programs, but despite my being on-topic in the group discussions, he stopped engaging with me while responding to everyone else. There were no private messages. It was the most passive-aggressive thing I had seen from a professional. The message from the marketing coach was becoming clear, “I’ll take your money, but you’re not getting the same level of attention as my other clients.”

I waited a couple more days to see if his outlook would change. It didn’t. Instead, he doubled down on his stance with subsequent posts.

So, I sent him a private message and opened with how an executive coach and former leader of mine once said on Beyond the Rut, “You can’t encourage someone if you’re judging them.” From there, I informed him that I was cutting off our business ties based on his words and actions over the past week. I wished him well. His response only re-affirmed I had made the right choice.

“Your call. We all have a choice.” With that final attempted to gaslight me, as if there was no wrong-doing or passive-aggressive avoidance behavior on his part, I stopped payment to his business and removed myself from his programs. 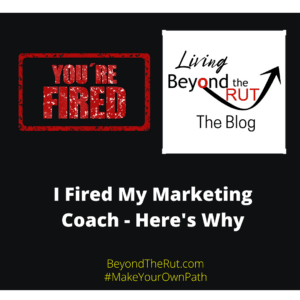 Know Your Values – Know Your Brand

You are each beautifully and wonderfully made! You have gifts, strengths, talents, and a calling on your heart to pursue a dream to make a difference in this life. Your unique perspective is driven by a set of values that may or may not be shared with others.

These are questions we have brought up time and again on Beyond the Rut. When you know your values, you have support and guardrails to pursue the “Why?” behind your dream and goals. You tune in with your values to know what is right and wrong. You have an idea of when to stand firm, and when to humbly ask for forgiveness.

The even I described above was small, yet with large implications for the Beyond the Rut brand. We are encouragers here. Your life has faced ruts either in the past or right now. Our guests have all faced ruts they’ve overcome. Telling their stories requires empathy regardless of whether or not we agree with their choices. My marketing coach took a path that went against some of my values and that of Beyond the Rut, and it left me with a choice of whether or not BtR needed to be aligned with him. It helped that the marketing coach made it an easy decision through his behaviors.

How many of us have held onto high-paying jobs that went against our values and convictions?

Here’s the caveat. Know and exercise all of your values all the time.

The marketing coach I fired held onto one value and strongly voiced it for all to hear. Another problem was he abandoned other values he was also known for such as empathy, having an open mind, and being an encourager. He betrayed himself in all this.

His jabs at the “other” stung a little, but I have thick skin. I was in the Army, a combat veteran. This wasn’t an attempt on my life just a difference of opinion. However, the dissonance expressed by the marketing coach eroded my trust in him. The top question on my mind was, “How can he be my marketing coach when he cannot even stay true to his own brand?”

Be Okay With Walking Away

My wife asked me why I was giving this marketing coach the benefit of the doubt when many others would have made the decision to separate from him in that initial moment. It’s because I believe in second chances, and that’s what I thought I was extending. It was clear though. This marketing coach was not going to change and was not going to exhibit the courage needed to do some service recovery.

There are times when we just need to walk away. I don’t mean go on a crusade to cancel everything you disagree with or do damage to another person. I mean simply walk away knowing who you are, what you stand for, and accepting this is where both parties part ways.

Be willing to and okay with walking away from something or someone that goes against the core of who you are and why your dream exists.

When I walked away from that coach, I realized I was already among a community of like-minded podcasters. Engaging with them has made massive improvements in the Beyond the Rut platform. It has been energizing, uplifting, and re-affirming.

In fact, if you are a Christian and a podcaster looking for growth and support among like-minded people, I highly recommend Christian Podcasters Association.

Life is too short to remain in your rut filling your mind with bitterness.

Life is too short to remain in your rut filling your mind with bitterness. Take the time you need to reflect, heal, and learn from what’s happened, then focus on moving forward. You still have a goal to accomplish! 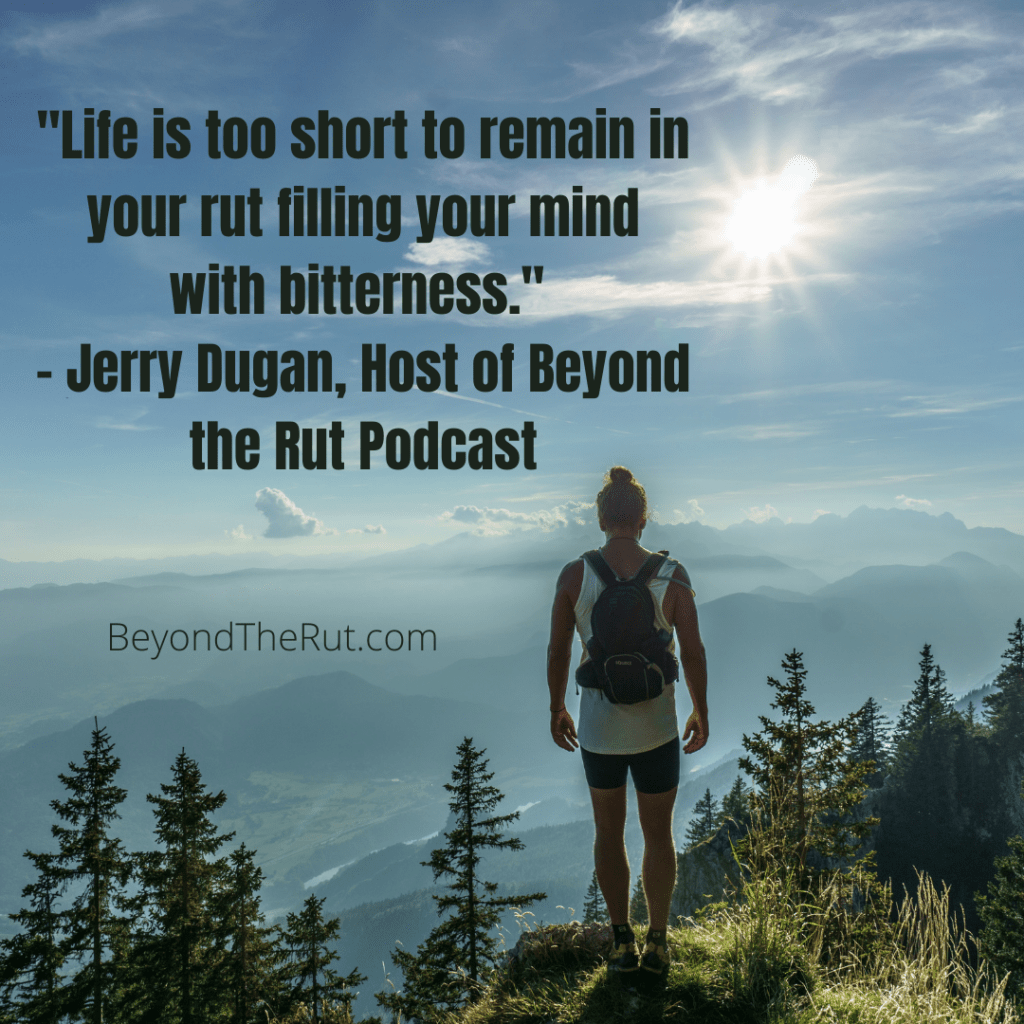 Maintain Dignity for All

We live in a cancel-culture world sadly. It seems liberating to call for a boycott and damage someone’s livelihood. End that person’s life as best as possible without actually killing the person.

There is a negative finality to this approach in life. Yes, I cut off ties with this individual because he’s going down a path that fundamentally goes against my own values and brand. No, that does not warrant that I go on a warpath and try to destroy his business

Here’s the thing. He didn’t do anything illegal nor unethical. I just expect a level of empathy and understanding from a skillful coach, and he did not demonstrate that. We also have the same circle of connections. Tarnish a community, because I can’t be a grown-up? That’s silly.

Most importantly, part of my faith as a Christian is that we are all created in the image of God. We are created with dignity and worth. All of us. That includes the people I don’t agree with and those who unabashedly insult their customer base.

Respecting and maintaining one’s dignity leaves the door open for healing, maybe reconnection, and future possibility. At a minimum, respecting his dignity allows me to move on even if I never do business with him again. It helps me stay on-brand with myself.

Comment below. What are your values? When was a time you had to sever ties with someone? What is holding you back from moving forward and out of your rut?

Until next time! Listen, #MakeYourOwnPath, and live Beyond the Rut!

Jerry – Host and Producer of Beyond the Rut Podcast

Related Episodes and Posts of Beyond the Rut

How to Dream Big with Barbara Fonti – BtR 244

I Fired My Marketing Coach – Here’s Why

5 Tips on How to Be a Better Working Dad Is It Time To Change Jobs, Careers, Or Bloom Where Planted?