We scored an interview with Danny Bollinger, Manager of Publishing for the Dallas Mavericks.

He’s the guy behind the promotional photography and writing for the team.

If it’s a calendar, program, video snippet or article for the Mavs, chances are Danny has had his hands and creativity in it for the past 17 years.

Leap of faith, is the best way I can describe how Danny Bollinger lives his life beyond the rut. He just seems to go for it.

His strong work ethic has carried him through time and again. Listen as he shares his insights from his first job at 12 years old to his first corporate job with Frito-Lay.

There is value to sticking to the process, putting in your time, and having perseverance. Danny’s story is inspirational, funny, and encouraging.

He’s a writer first with a passion for collage and photography.

Originally from a small town in Iowa, Danny took a leap of faith and moved to Dallas, Texas to live a bigger life. He struggled financially for years taking on work where he could find it, and eventually his photos and work ethic caught the attention of Mark Cuban.

Danny Bollinger has worked for Mark Cuban, billionaire and owner of the NBA’s Dallas Mavericks, for 21 years. He’s been a part of the Dallas Mavericks ever since Cuban purchased the team photographing and writing about the team as it transformed into a winning franchise in the NBA.

Danny sees himself as the “little people” despite knowing some of the richest people in the world.

It’s clear that Danny Bollinger makes the most of every moment. He talks to whoever is in front of him. That was no different in our conversation with him in this recording session.

You can see his works at DannyBollinger.com or on Instagram at @dannyb_gps. 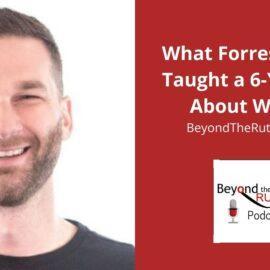